Despite a night of little sleep, I took off early on Saturday morning with the Pugsley on a ride out Blue Mounds to attend a trail work day with CORP. It's about 10 miles of pavement from my place to where the gravel starts, and the latest reports of the trail were that it was too soft still, but that was almost a week ago and big tires float well. As soon as the tires hit the dirt I knew it was going to be fine, there were soft sections but I barely left a print. I lowered the pressure down a bit, from an initial rock hard 20 PSI, to smooth out the ride but was worried about going too low and picking up resistance which which would have been undesirable for the 60ish mile trip.

The ride was mostly an experiment to see how the bike felt for long treks because I'm considering taking it on B.A.L.L.S to try and make the Cheese Country trail at bit more tolerable. The weight is certainly noticeable, but the wide bottom bracket was the big concern and thankfully my knees didn't complain about it.

The work day was scheduled to start at 9am, so I was riding against the clock and was pushing the whole way to make it but never really checked the time (what good would it do anyway). A coworker mentioned that he was starting a road ride at the top of the mound with a big group at 9am and sure enough, right as I hit the park road, several dozen road bikes came screaming down the hill, perfect.

Build some trail, everyone took the Pugs for a spin, struggled on the way home, did yard work, became zombie, in bed by 8pm. 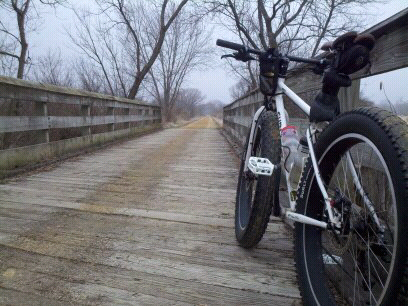