The sun was out on Saturday the temps were up and I was getting anxious to ride something dirtish or at least not easy. H8tr, site of the MBM, delivered.

The initial spur off the Southwest commuter path was unrideable snow but it got better after the railroad bridge. Hmm, better, let me be more clear. On a scale of 1 to 10, with 1 being pavement and 10 being unrideable this trail was just retarded. Walkers and animals cratered up the snow and then freezing rain gave it a nice thick coating of ice. The studs on the frankenbike are now rounded and useless, there are bruises to prove it. 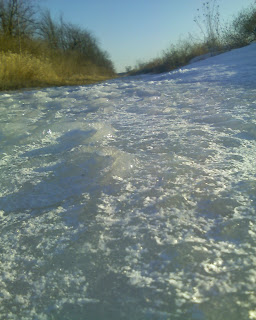 An unfortunate soul is resting in the middle of the trail. 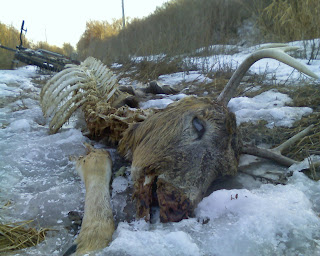 The sounds of yielding ice and snow were better than any earbuds could provide. The auditory experience changed frequently and dramatically as the snow mutated from to shadows, puddles, fields and pedestrians. Franken bike dropped his chain several times but we've come to an understanding about this sort of behavior, he doesn't pretend to work perfectly and I don't give him too hard a time about it and we always make it where we're going. 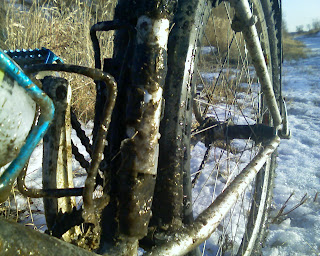 All in all about two and a half hours of saddle time and at least some of it was dirty.
Posted by brassnipples